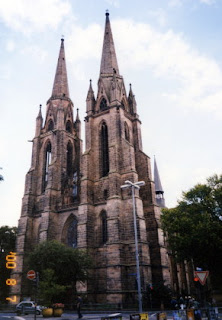 Teil Neun
To hear this week's story, click on Elizabethkirche on your right. 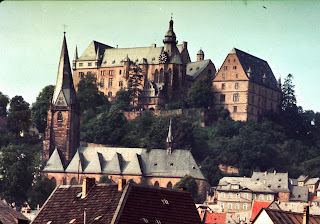 To read this week's part, come the castle.
This week in The Prattler, Low Batteries.
Posted by Doug at 5:07 AM

How do I make The Prattler feed accepted in my Google Reader?

Those old Gothic churches can inspire devotion in any heathen.

Doug: I love your turn of phrase (I could decide how to make it plural.)

I can just imagine a farmer working in a three piece suit.

Nice reading, very nice reading. One of my favourite episodes to date.
"Pious as a pew"...if that's a saying in your country I think it is great...if that is something you came up with: brilliant!

Love the Marburg pictures and it's majestic description!

Rabbit, rabbit! I have to come back later to read/listen.

rarebit rarebit, Doggie...
hope all is well
in your world...xo

Nessa, I have no idea how to make the Prattler open in google reader. I tried myself and failed. iWeb has this cool automatic RSS feature which also seems not to work. Alas alas. And thank you.

Icy, they do more and more nowadays.

Thanks, Minka. As far as I know, "pious as a pew" is original but it doesn't seem original.

Rabbit rabbit, JJ. Things feel like they're grand here, thanks, which is as good as it gets. Hope they feel well by you, too.

Rabbit rabbit, Actonbell. Home is where you're never late.

A true conspiracy against "The Prattler" from Google. Doug has not burned a Google feed or burned any feed that I can tell so you can't add it too the reader. I've tried. You have to add him to a google home page,and you will get the feed.
-----
The only open esophagus had me.

I didn't know a pew could be pious - rather only the rears and knees which frequent it.

Your pictures are fabulous - but hearing you read was the best part. You make it such fun.

i read today vs listened yesterday-enjoyed-Peace

I assumed, Doug, you meant "trachea" and thought no more about it. Unless the good people of Marburg in the 16th century were dipteriphagous. Which, come to think of it, might have represented a square meal for that boy in the stable.

Cooper, this burning you speak of...how does one accomplish it? Cooper, I got stuck between "open esophagus" and "bare larynx." I mean I was stuck for a week, which is why I did the recording.

Terry, a pew is made pious by the sanctified butts that rest on it.

I'm glad, Bear, thanks. Peace be unto you.

Oh, heck, Amoeba. See my response to Cooper above. Would that have been better? "Uncovered Uvulae?" "Target-ready tonsils?"

That accessible esophagus line cracked me up!!

It's good to be back in Blogdom.