To hear the poem, jingle the bells. 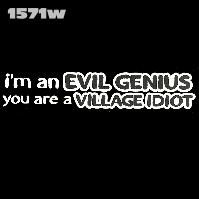 Email ThisBlogThis!Share to TwitterShare to FacebookShare to Pinterest
Labels: Fiction, Friends, I, Story

Um is a good title anyway.

that's a typo, Douglas. I guess you meant 'Aum'

dnlwh: down with lazy whining

Good luck! In whatever you do. Unless it's murder and mayhem. So I guess I'd better amend that.

Good luck unless you intend to commit crimes and acts of unlawful and violently depraved actions. I do not, and will not, wish you luck in any other use of such of your members as may render another less able in fighting either to defend himself or to annoy his adversary (you in this case); and therefore the cutting or disabling, or weakening a man's hand or finger, or striking out his eye or foretooth, or depriving him of those parts the loss of which abates his courage, are held to be mayhems. I will not, and cannot, wish you luck in those actions. But cutting off the ear or nose or the like, are not held to be mayhems at common law. SO good luck with that.

It's the American way.

Thank you, Ariel. I had to change it, of course, but it's not every day I come up with two titles, is it?

Miz B, I did kind of tempt fate with that word, right?

Karma, I'm an enthusiastic whiner and a lazy poet.

Well, TLP, will you at least vote for me then?

Oh hermano mio! I applaud you at such a brilliant work of art I so kid you not!

Your powers of keen and astute observation, cleverly worded commentary, and brilliantly devised rhyme (and THAT'S how you work a rhyme DAMMIT!!!) all as a big bang of a humorous ode to a friend leave me breathless...

I seriously have nothing more to say as I am still reeling from the brilliance of your work...

... yes, bohemians get mushy but when that happens 'tis 'cause it's sincere...

well this was INCONTHEIVABLY funny! and fun. Chaucer must be rolling in his grave, laughing.

i have no idea what that means... and i don't care.

of course, with all the yipping, i assumed this post went up late. but now i'm guessing "Um" was the original title? instead of "Duh"... or the more current "D'oh!"??

whatever. this was EXCELLENT, and sleepy brains across the country salute you!!

I respect poets so much!

Way to rock the rhyme and honor an Idiot ~ that was great (really).

Of course I'll vote for you. Whatcha runnin' for? The Idiot position is already filled.

Grrreat!
I really like that idiot.
I'll give him a hamburger for nothing, and then we can watch Popeye cartoons together.
We will eat french bread and dip it in "Olive Oyl," and I will whip up some spinach dip.

AND, did you know that "Bluto" is no longer a planet?!

*blus* If I had not gotten hammered last night, I would have read the comments on hammered and found that you linked to my Web Site.....Thank you :) for linking me and for your compliments....

Penguin: Auntie took it for granted that you had your ears covered while she was talking to Doug.....if not hammered does not mean what you think it does....*wink*

Impoverished: or in re-verse

A dog named Doug met Ambrose Bierce within a book one day.
The words they jumped right off the page and caused the dog to say,
"Oh, the wonder of these words, they surely must be mine!"
So the dog named Doug created a blog which simply is divine.
A place where wisdom, wit and ridiculous all meet in one accord
To thrust and parry, swashbuckle and flash swift as a dueling sword.
People travel by 'net the world around to insult boast and mug;
And when you ask them why they say, "Ya gotta dig that dog named, Doug!"

I grinned all the way through. No impoverishment here, in wit and skill. ♥ xoxo what? no more dingbat references?

The poor often have the true riches of life

Just taking a comedy break from my writing. The question is, whom are the true idiots. The jester so maligned, or the readers who pressed play?

Chaucer's wrong, I deem it so,
The one who'd love this bit is Poe.

or not. doesn't matter... anyone who can find a way to pay such a fitting tribute to the Idiot by referencing everything from Popeye to the Princess Bride--in rhyme no less--has a dizzying intellect of his own worthy of MUCH respect and/or praise!

Oh do be careful whom you invoke on these pages, dear Puppybrose ...

I sure hope our Dawg's doing better than that in the financial status department. Probably not in the Poe-etry emulation department, I would guess. Even T. S. Eliot made his money in book publishing, not The Waste Land.

Proud to have you, hermana.

Haha, Puppybrose, but while I like the song you bellow, in the crypt you picked the wrong fellow. And yes, when I woke up this morning I wasn't quite sure what was coming here so the original title was "Um."

Ariel, I do too for reasons that should be obvious.

Mo'a, too a carpenter hammered can mean a lot of things.

Sure, Dusty. As long as there are drunken noblemen there will be rich paupers.

Thanks, Actonbell. Happy Saturday to you.

O Ceallaigh, I haven't started my descent into the maelstrom yet.

Puppy, I knew I could like down my nose at Poe for something.

Longfellow and/or Poe... VI and/or Vizzini and/or Wimpy... it's all good.

my head wandered into a Medieval Canterbury Tales thing at first, then that flapping Raven droppeth a "nevermore" upon my sad noggin. thus my ability to overlook the simple/tasty chestnut you tossed out in the beginning of your FINE story. (geez... rub my nose in my ignorance of all things poetic, why doncha??)

Hmmm ... and here I thought that we were going to further define "impoverished" ... and in 27 comments it's mentioned only three times. It would appear that today's definition itself has become impoverished. Or at least mostly ignored.

"Your family's so impoverished, when you go to KFC you have to lick other peoples fingers!" (I've forgotten who I stole that from.)

Doug - to a curmudgeon a critic is considered a complimentary extraordinaire. That said, you're welcome, and my invoice is virtually in the mail.

Now if you'll excuse me, I'm off to Prattle in the key of F.

Actually, Puppy, I owe you an apology. This morning was such a rush I forget I went Poe at the end.

Dddragon, thank you for bringing impoverishment to those who have none.

TLP, your family's so poor they had to rob a bank to get deposit slips.

Sar, it was sincere,

"Sure Dusty. As long as there are drunken noblemen there will be rich paupers."

ROTFL! Balzac would love it, too.

Apparently I am impoverished, which of course makes my life toilsome and lacking in eeeees.

(And no, I didn't do that on purpose -- it was serendipity -- my true wealth.

Very nice. Some problems with the metre now and then, also...I looked at it again and again...and I am not sure about the rhyming system...you mix so ecclecticly. But afar from that...very impressive!

And look, the Idiot is late to his own party...how foolish of him!

Wonderful poem.
Illusion is our impoverishment, lacking verity. Virtual Reality is neither virtuous nor real. How poor fools we are fretting our fifteen minutes under the tumtum tree.

Applause, applause
Well done, Doug.
It is a wonderful work of art describing an unbelievable piece of work.

[picks up an ashtray]

Navin: "And I don't need one other thing, except my dog."

Douglas...please come back! I was just kidding! I didn´t mean it...I am sorry *rolls eyes*

Thanks, Ariel. I may not be a poet but, by golly, I like to think I'm still a smart Aleck. We all have bad connections now and again.

Quilldancer, better to be lucky than good. Especially if you live anywhere near the new dot on my guest map.

Monika, you have my eternal gratitude. Thank you. Yeah, the meter was a mess, wasn't it? Just for giggles, let's say I was trying to make a statement about Idiots and the language we accost them with.

Lammy, are you sure verity isn't our impoverishment? In my illusions I'm a billionaire. Good lookin' too.

Thanks, Logo. You know better than I.

Puppybrose, that's a movie our whole generation knows the lines from, but you're clearly the best of us.

Monika, quit yer bellyachin' my skins thicker than that. And since you clearly don't think I'm any kind of artist it's a little silly to expect an artistic temperament. Just another layer of insult, really. Critics!

I live in the city where luck is called Lady amd every once romances her -- except me. I work too hard for my money, dropping it in a matalic beast just to hear a few clicks and a ding is not my idea of a good time.

Sadly enough, I know a lot of people who fit that description of the village idiot, or should I say village idjit? At least, that's how we say it in the South. And even more sad is the fact that when calling a southern man an idjit you are also calling him a white, trailer trash, ignorant redneck... all traits of which a few members of my family have. However, they definitely can't rhyme... much less spell idiot. *sigh*

Not that anyone is any smarter by the 2 cents that I aparently have found it necessary to say.

No impoverished poet you.

Doug, one doesn't have to be an artist to get easily offended. it's just a little practice.

Ya know, I could be first once in a while, if you would impoverish yourself of a little sleep.

Ariel, and I really tried ;)

Quilldancer, A long time ago I was a Nevadan myself for a little while, although up near Winnemucca. The nearest place I could cash my checks was a casino and it's a funny thing about age. I bet I could get back out of there now in half the time at twice the weight and age.

Solace, not to surrender any implied credit, but that poem said "idjit" (the meter was better than) until I started to read it and feared exposing my redneck past.

Ariel, how would I know? Hmmpf!

Sorry, TLP, I forgot to tell my clock it was no longer Sunday.

Minka, you and Ariel are very noble and hardworking for critics.

Doug, I am not really a Nevadan -- I am a Northern Idaho transplant -- and I am seriously starting to wilt. I love the heat, but the sand and concrete are killing my soul. I miss pine trees and icy mountain streams.

Hey, that Idiot is my cousin!