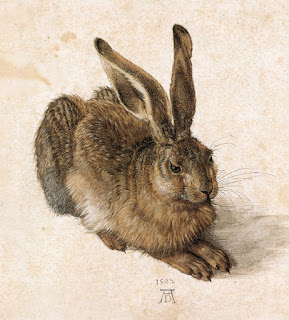 Teil Dreizig
To hear the Amoeba and Quilly read this week's episode, click on the bunny. 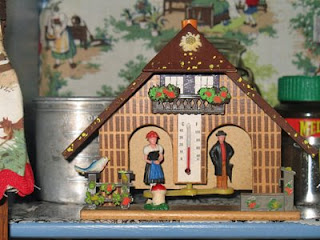 To read it yourself, check the temperature at the cottage.
The story so far is here.
Posted by Doug at 5:45 AM

i think that i'm about 20 weeks behind. Maybe i can catch up now...

As you know Doug, I really am enjoying this story.

rabbit wolfshausen rabbit, dog!
hope you had a peaceful vacation?

Doug, this was an hysterical chapter. It had me laughing all the way through and I don't think you could have hired better actors. Quilly and Amoeba have missed their calling. Especially loved all of the guttural German accents, Amoeba.

* * *
Please visit me at The Chrysalis Stage and Esoteric Uncovered.

That was quality reading, so much like professional. And your writing seems to suggest that it wants to be a novel.

I've always been fascinated by Albrecht Durer. "The Young Hare" is one of my favorites.

Thanks, JJ. The vacation was swell and I hope you're well.

Thanks, Nessa. Should we call OC's a Swabian accent, since I don't know what that sounds like and don't recognize this?

Icy, I don't think I could write a novel, but I've noticed, too. This is pulling for something longer than I've written before. Here it is August and I don't think we're much more than 1/3 done.

Yeah, Actonbell. One or two more parts to clean up "Dietrich's Dilemma" and then I think we'll be on to something new.

Good eye, Karen. I like Dürer as well and he's perfect for the time and place. I've used some of his art for the links before and expect to again.

Leans toward theater, possible local at first, to test the waters, then.....the world.

You already have your first cast members.

It does lean towards theater, cooper - almost embarrassingly so. Alas, the life of a a damn viking! Ferry fares paid - HOUSING even - for an incredible four nights.

Where do we go on the 13th and 14th? Sounds like a glitch in plans!

I could have sworn I left a comment here yesterday telling you how much I am enjoying this story and what a privilege it was to be included. I had a great time!

My thanks to everyone who enjoyed my serving of ham.

To prepare the ham: Place the meat on a cutting board. Using a sharp knife, score the fat in a cross-hatch pattern, cutting all the way through to the meat.

Put the ham in a large roasting pan. Spread the honey over the ham. Combine the thyme, bay leaves, and juniper in a small bowl. Season the mixture with salt, and then rub it into the ham. Pour the beer over the ham. Cover the pan and marinate the ham in the refrigerator for several hours or overnight.

Preheat the oven to 320 degrees F.

I am enthralled with this story! Poor Dietrich's new trousers got muddied. I like that he brought her flowers even if most of them got eaten. I look forward to next week's episode to see how this son and grandpig thingy works out.

"Oh, I dunno, dude. Depends on the tackle, the test on the fishing line, and how strong Doug is. But if he can manage it, I reckon he'd catch himself one hulkin' big marlin with either one of 'em."

"Dude, does this weird stuff you're puttin' down have something to do with the ham Quilly was talkin' about?"

Great writing as usual, Doug; as Quilly said, we enjoyed being a part of your production. And thanks to all who applauded our reading.

Bear, why do you need a ferry? Hitch-hiking to Havnafjördur?

Cooper, I think this episode has "community theater" all over it.

Karen, I think Bear and Terry are heading for Akuyreri.

Anonymous B, that would be a side trip, I think.

Quilly, let's blame blogger that it didn't get through. Thanks for having so much doing the reading.

Thanks for the public service, 3c.

JD, I'm glad you're enjoying. Next week's a sermon. Want to give it?

Thanks, Amoeba. When I saw the Dude's "cast" pun I was thinking Marlin immediately.

Rabbit Rabbit - okay, way late, but hey, so what?

Quilly and Amoeba are superb together - an inspiration to the Bear and I. Doug - where do you get these stories? You have a vivid imagination - still.

Yes, another Icelandic ferry trip to make me seasick - but it will be fabulous up to the West Fjords.

I'm jealous of that, Terry. The West Fjords look absolutely cool on a map. Have fun.

Little saddened by teh ending. I support the idea of a mistress of swine to pork up with a well-cut carpenter. But alas...let us see where it will go!

Minka - you sound like a gal I could be friends with -- any more predictions?

Minka, I'm not sure what "to pork up" refers to but I just don't think a gay carpenter and a pig-mistress would have worked. Still, we're only about 1/3 of the way through (I think) and I'm not sure what will happen two weeks from now so we'll see.

Karen, I don't know if that was a prediction, but I'd like to hear one.

Lol... Aunt Quilly told me there was plenty of ham here... She wasn't kidding.