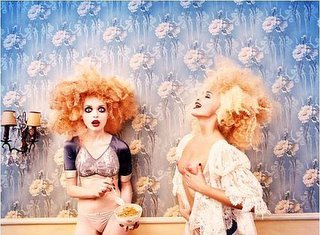 This week, it's my pleasure to feature my friend, the beautifully miscegenated, generally elevated and reliably opinionated Miz Bohemia as guest. Miz Bohemia offers the following definition:

Multi-cultural, adj. 1. The creative interchange of numerous ethnic and racial subcultures. e.g. Grandpa BoheMia is Danish-Icelandic and he falls in love with Granny BoheMia who is Iranian with some ancient African-Iranian blood in her. They get married and have babies. One baby grows up to be Mama BoheMia who falls in love with Daddy BoheMia. Mama and Daddy BoheMia get married and have two babies, the first one being Miz BoheMia. What a true creative interchange of numerous ethnic and racial subcultures! Well done Grandpa and Granny BoheMia!
2. Strongly influenced by or having prominent characteristics of several cultural groups or peoples. e.g. Mama BoheMia leaves Daddy BoheMia as well as Iran when Miz BoheMia is all but 2-years-old. They move a lot. Miz BoheMia lives in Spain, Denmark and several US cities, travels extensively and attends Spanish, British, Danish and American schools. In her first high school, her closest friends are Armenian, Zimbwabwian and Vietnamese. She is accepted with open arms into the African American Community at her second high school and her closest friends are Slovenian and Mexican. By college, Miz BoheMia hangs out with Tibetan Buddhist Monks, dances her Sundays away at the local Hare Krishna temple, meditates with New Age Group Hippies, attends animals rights rallies with the likes of Def Leppard's Phil Collen, starts a chapter of Amnesty International at the college where she makes Muslim, Catholic, Buddhist, Christian, Jewish and even Republican (gasp!!!) friends. Mama BoheMia! You have allowed Miz BoheMia to be strongly influenced by or have prominent characteristics of several cultural groups or peoples! Kudos to you!
3. Personal Definition: A term attempting to capture a cultural phenomenon born out of the mixing and intermingling of different ethnic and racial subcultures but that falls short of capturing the emotional, social and educational complexities that arise as a direct result of this phenomenon. e.g. Miz BoheMia is Iranian-Danish and raised between Spain and the US. She leaves out the Icelandic. Simplifying the long intro is best and she has had no Icelandic influences in her life.

Miz BoheMia has curly hair, hazel eyes, a normal stature, skinny frame and an olive complexion. She looks Iranian, Mediterranean in a petite Scandinavian frame, minus the height.

Looking the part of her Middle Eastern heritage, she speaks the language, albeit in an accented Farsi, and is mistaken many a time for the "real thing". This gets her in hot water friends for she does not cook, is not crazy about serving men, or anyone else for that matter, does not like boisterous family reunions nor decorum and ettiquette attached to words such as "tradition" and "obligation" and does not believe virginity to be a virtue. Yes, she looks the part of an Iranian girl but after that there is not much common ground for our Miz BoheMia.

She is liberal, mostly a loner unless the company she keeps is her choice, likes her space, her privacy, her activities, her schedule, her territory and her boundaries. Her actions and her petite frame are truly Scandinavian as are her liberal sexual views but the olive in her skin, the curl set against the backdrop of brown hair are typically met with resistance and her claims of Danish blood in her veins with skepticism.

Her looks and her accent fit right into the heart of her Spanish province but before there is a beginning we come to the end. With heavily pierced ears, a pierced nose, non-smoking, juice-drinking, veggie eating and yogic habits Miz BoheMia is out of her element in this smoker's, meat eater's, bullfighter's, heavy drinker's, non-exerciser's South.

Multicultural... often viewed as exotic, enriching, unique... all true. However, there is a reality of pain attached to being multicultural as it entails a constant need, by society, for a neat and tidy definition of what cannot truly be boxed into one word and set in stone. The multicultural individual is one who learns that nothing is 100%, that fitting in ain't gonna happen... multicultural... you know what, perhaps we should take another look at the word...

4. A term coined out of a need created by the cultural phenomenon born out of the mixing and intermingling of different ethnic and racial subcultures in order to create a much-needed and broad niche for those individuals that fall short of a definition. Multicultural... that's me.

About Miz Bohemia: See Multi-cultural. A mother of two, poet essayist, yoga instructor and purveyor of fine fashion accessories, Miz Bohemia has been a generous new contributor to the blogosphere. She is the author of Miz Bohemia's Rhapsody a site as well-traveled as its creator. Miz Bohemia excels at bringing an adventuresome spirit to an electronic medium, something not easy to do. Miz Bohemia also offers two fashion-sales blogs, BoheMian Funk, and BoHo BouTIQue on which she describes the purses and bags she sells, an ancient and honored tradition in the Persian-Danish-Icelandic-Spanish-Californian community. I very much enjoy her writing and think the products she sells are cool-looking. I admit, though, your humble editor is as fashion-backward as Miz Bohemia is fashion forward so judge for yourselves. Thanks to Miz Bohemia for being a guest here and for inventing Autobiographical Lexicography. Remember, friends, it happened here first.

How to be a future guest in this site: Just send an email to dpascover at mac dot com. On a future Wednesday, after posting that week's guest, I'll send you an email with a word to define. You'll be expected to return your definition along with a graphic representing either your definition or yourself by the following Saturday. The only rules are no profanity and no novels, please. And whatever I make up at the last minute.
Posted by Unknown at 3:15 AM

No Icelandic influences in her life?...enter Monika!

What a melting pot of blood in one such tiny creature. The mouth, however, in proportion seems rather big :)

miz bohemia is not new to me, am a fan of hers for a few eeks now and glad she is featured here. And if I hurry I might be number one again...yeah, yeah...I know it is no competition :)

Glad to meet you Miz Bohemia. I've seen you around, but this is our first formal intro.

Multi-cultural: Recognizing similarities between myself & Miz B, including our occassional suffering from diahhrea of the fingers. ;)

Very pleased to make your acquaintaince. All so formal today!

I feel I know you already, Miz Bohemia.
multi-cultural: Word thrown around a lot at Veryred State U, especially by the new Diversity Program, which hopes to cover up all the fuss over the fraternity posting pictures showing a pretend lynching and lotsa laughs for Halloween.

Monika, you won! Noe explain to Miz B the ways of Iceland.

Thank you, Pia. Miz Bohemia and I want our places in the history books secure.

Weirsdo, that happened at UCLA a few years back. The only thing in this world dumber than a chicken is probably a college student.

Geez, Doug, what does that mean to those of us with more than one college degree?

rah rah my wonderful friend Miz B! there is so much i did not know about her ... but i do know she's the one on the left ;))

Mere words cannot describe the wonder that is Miz B.. I loved reading that post :-)

Wow! What an amazing gathering! I need to say hi to all or else I will truly feel rude!

Monika~ Yes dear friend, enter Monika! And I am very thankful to you for that! As for my big mouth...*sigh* always gets me in trouble!... *shrugs* oooops! ;-)

TLP~ Glad to meet you too! I have been enjoying your quick wit here in Doug's world! Keeps us all on our toes!

Sar~ Gracias, gracias... Be careful, though I know what you mean, I think you are scaring Doug!

Pia~ I have been a secret admirer of your site! Pleased to make your acquantaince as well! *the bohemian curtsies* I agree with Doug... you can be our witness then!

Weirsdo~ Thank you... I am quite intrigued by your Barbie art! Tell them I love their Christmas tree! Ooops... should I have said Holiday Tree?

3d- Thanks for dropping by my place! Honored to have you there!

Laurie~ You are too sweet to me! Big besos to you from Spain!

Dddragon, it means you've come a long way. I guess I should specify fraternity member before Alice gets here.

Karma, she told me she was the one on the right before I agreed to post it.

Welcome, Laurie. Any friend of Miz Bohemia is a friend of mine.

mizzy B: a truly delectable expose.

What an interesting woman! I really enjoyed reading this. :-)

Hello from us as well.

I always wondered what the rest of your profile picture looked like. Is that a bowl of cornflakes you're eating?

Nice to meet you Miz. I've seen you in a few spots, this was evry enlightening. Nice picture, indeed!

I looked at the length of Miz BoheMia's definition, and went UGH! But then I started reading. She is a fascinating person! What a colorful life she has lived. I enjoyed this very much.

Miz: Keep making people scratch their heads. I think that's one of your gifts.

We need more enigmatically beautiful people like Miz BoheMia in the world!

Thanks, Alice. People are just exposing themselves all over I notice.

No, Poobah, she's just happy to see you.

Omnipotentpoobah~Yes it is! Would you like some? You'll have to ask my alterego for some milk though...

Fred~Thank you... the picture... it has always been well received.. can't quite put my finger on it...

Jamie Dawn~Thank you... Glad you made it through!

Doug~You have made this bohemian's blog dream a reality!

Yes, I think I will be MizBohemia when I grow up. She is FAB. I'm not kidding. Talk about je ne c'est quoi. xoxo

very nice, autobiographical lexicons should only be attempted by interesting people, well done!

Hi, Miz Bohemia, nice to meet you! Wow, what a fascinating bio--and your picture is intriguing, too. Sort of Little Miss Muffett meets...Madonna? I like it. And you seem to fit in quite well here.

Mireille, I think you and Miz Bohemia should make a shopping date. Just remember to sedate the husbands first.

Thanks, Logophile. I see Ariella let you use the computer again. What a good dog!

I would have expected no less, Weirsdo.

Another great guest and definition! It's too late and I'm too tired to add anything wise myself. But a great post!

You still wear the crown, AP3

So no novels and no profanity... but boobs are okay? Doug you neandrathal you!!! :) I love that picture actually. I've found my look for my next party.

Actonbell~ Nice to meet you too! *laughin bohemian* I like your description of the picture! Glad you liked it!

Weirsdo~ I am respectfully yours!

ap3~ Thanks for commenting at all! *flattered bohemian blushes*

masil q.~ The picture... it just is boobieliciously entrancing....

she is wonderful and now i can go check out her other sites.