King, n. A male person commonly known in America as a "crowned head," although he never wears a crown and has usually no head to speak of.

A king, in times long, long gone by,
Said to his lazy jester:
"If I were you and you were I
My moments merrily would fly --
Nor care nor grief to pester."

"The reason, Sire, that you would thrive,"
The fool said -- "if you'll hear it --
Is that of all the fools alive
Who own you for their sovereign, I've
The most forgiving spirit." 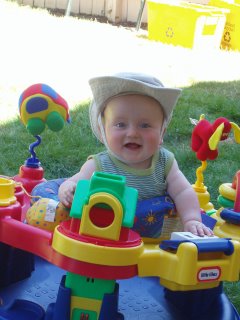 Happy Birthday to King Stevie I of Portland

Left, Stevie Mooney, Crowned Head
Posted by Unknown at 3:41 AM

Today's King: An Ozymandias made of plastic.
Yippee! I'm the first!

Stevie's such a cutie! I love the King's cowboy hat crown.

Doug: You're the King of this blog :D

King Stevie looks more like a captain, piloting a spaceship in his cowboy hat. May the force be with you, Han Stevo!

King, n: [Citing Mel Brooks, who had it right a long time ago] What it's good to be.

Gosh, your profile picture is so royal, may I be the jester at your court?

King, n: Someone who waits a long time, pretending he doesn't care, then finally really doesn't anymore. (See funny-eared English princes, American men in the blissful time between when his youngest child is almost out of high school and his first heart attack.)

Stevie sure looks good. A future blogger, for sure.

Thanks, Sar and nice pun! It fits. I'm headed up to see the lad this afternoon. See if I don't steal that line.

A mere Administrator, Marwa, but thank you for the puff.

S, the force is strong with that one. It'll need to be. His jackyl cousins and goofball Uncle are in-bound. And thanks for dropping the other shoe.

Monika, my court is mainly Jester. You can have a more elevated title, if you'd prefer. Food-taster?

Fred, I think he's already found his voice. Thanks

Niks and I together on the picture of the young prince: Awwwww.....

About kings I know nothing, and care less. Most of them certainly are funny-looking. But beauty is only skin deep. It's their empty heads and skimpy hearts that matter.

Ladies and gentlemen, Elvis has left the building.

Thank you, Ariella. And kind to the little people.

The only royal I bow down to--picking up food, toys, books, dog hair, bottles and the like from the floor. Oh the pleasures of being this king's grammie! He and his subjects can't wait to see Lord Schnicks in P'land. Bring your wool lined cape,son. It's c-o-l-d in the hinterlands!

Hi Doug's mama; your grandson is so noble, and lets not forget plain cute and slightly aristocratic looking

Doug you can rant on my blog anytime. Actually I was a bit nervous about that post, and I never think about my posts after I write them, because of you and Belinda, and all the other wonderful people I have met. Was actually going to put in bold "This isn't meant at...." but thought that would be too strange, even for me

Hey, Mama. I assume you got leave to log in here.

Masil, I'm told Stevie has given you leave to stand in his presence. It's quite an honor. He still makes me crawl and calls me "worm."

King- Handsome, royal male living in the lap of luxury and basking in the riches that come from the hard earned tax money of his subjects... an expensive piece of useless, womanizing, although-no-reporter-would-be-caught-dead-writing-about-it-because-his-subjects-blindly-love-him-and-he-is-quite-the-charming-man, moocher...

Disclaimer... aimed at the king of España... other kings out there... hmmm!

As for the sweet little prince in the picture, Happy Birthday! May you have a very special day and a beautiful, fun-filled year ahead!

Now, THAT is a regal presence, indeed! Many happy returns of the day to HRH Steve--long live the king!

I'll ditto the remarks about King Stevie being such a cutie!

Have a safe trip crawling up there! Are Willie and Walela going, too?

Doug, are you ignoring my cheesy definition today?

I see that sis' (dddragon) and I think alike!

Yeah! AP3, I saw that you got dissed. Hrmph!

MB, of course you meant El Rey. Who else?

Thanks, Belinda. I'll pass your message along. He loves his subjects.

Icy, Willie and Lela have to stay home and pay bills.

No way, sis! "Thanks, Rani" was for you in deference to your noble nature, your exploration of Hinduism and your Shiva/P3 persona. Rani="Queen" in Hindi.

TLP, I meant no dissage but you're right to give me a hard time. That's' a good mama.

Oh! See, that went right over my noble head.

Thanks for sticking up for me anyway, Mommy! :-*

Any time there's a baby picture, my heart melts and my train of thought is lost. What a darling baby! Love that smile! Babies are heaven! I would like to have had a couple more. I still could... but I won't. If I could make my kids be babies again, I'd do it in a hearbeat.

King - (a) a lower-level inbred used by the superior masses as a modern day freak. (b) a master of rock and roll known as Elvis

Aral, see and that was the first Hindi word I learned. She meant it, too.

Jamie Dawn, he takes a good picture, doesn't he?

RUKSAK! Delighted you stopped by. Great definition, too.

King; I don't believe in the word myself making it difficlt to define, that and the shorter words are much more difficult after a long day. Historically they either lecherous old men, evil personified, or mere babes in the woods with a monarchy thrust at their feet.

Once on a time was a King anxious to understand
What was the wisest thing a man could do for his land.
Most of his population hurried to answer the question,
Each with a long oration, each with a new suggestion.
They interrupted his meals - he wasn't safe in his bed from 'em -
They hung round his neck and heels, and at last His Majesty fled from 'em.
He put on a leper's cloak (people leave lepers alone),
Out of the window he broke, and abdicated his throne.
All that rapturous day, while his Court and his ministers mourned him,
He danced on his own highway till his own Policeman warned him.
Gay and cheerful he ran (lepers don't cheer as a rule)
Till he found a philosopher-man teaching an infant-school.
The windows were open wide, the King sat down on the grass,
And heard the children inside reciting "Our King is an ass."
The King popped in his head: "Some people would call this treason,
But I think you are right," he said; "Will you kindly give me your reason?"
Lepers in school are as rare as kings with a leper's dress on,
But the class didn't stop or stare; it calmly went on with the lesson:
"The wisest thing, we suppose, that a man can do for his land.
Is the work that lies under his nose, with the tools that lie under his hand."
The King whipped off his cloak, and stood in his crown before 'em.
He said: "My dear little folk, Ex ore parvulorum -
(Which is Latin for "Children know more than grown-ups would credit")
You have shown me the road to go, and I propose to tread it."
Back to his Kingdom he ran, and issued a Proclamation,
"Let every living man return to his occupation!"
Then he explained to the mob who cheered in his palace and round it,
"I've been to look for a job, and Heaven be praised I've found it!"

King, n. The feeling and position of relative ruling satisfaction, after a knight takes a queen.

*blush* Sorry about that! Good crossword puzzle word, so I should have noticed it. *sigh* I would say I'm gettin' old, only I'm not.

King, n.
1. A sovereign who usually begins his philandering at an early age.
2. The final, and best, album release by 90's alt. rock/pop band Belly.

Dr. Weirsdo at the grill.

Alice, that was amazing. I want to say more but it would only be synonyms.

A ruling junta, then, Jamie Dawn.

Gabriel, whatever could you mean?

TLP, I had the very thought "But she does crossword puzzles." You're not getting old, just a good mom.

Good definition, TLM. Being a dork I have no idea what is this Belly you speak of.

Weirsdo, if I had a memory like yours I might have a few degrees too. God bless (the other) Dr. Weirsdo.

Rudyard Kipling thanks you.