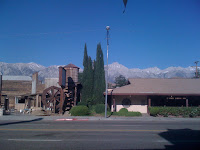 That which we would we no longer can.
The ship of state is sunk and  when at last a fine
People were put to the test.
The proposition failed that each is a master.
That which we wouldn't may be a better plan.
For the sky remains blue and Whitney tall over Lone Pine
And man is a fool so it's probably best
That he brings his own plans to disaster.
DIRECT DEMOCRACY, n.  Government based on a theory holding the average citizen superior to the typical one.
Posted by Doug at 7:10 AM

Direct Democracy: You are what you eat; Garbage in, garbage out; Stupid is as stupid does...
Did WE do THAT?

And Representative Democracy is better????

So lemme get this straight. I read that 60% of CA tax revenue comes from 3% of its citizens, Sergei. If this 3% takes a hit, that leaves a huge hole in the bank that will take a long time to fill with nickels and dimes.

The nickel-and-dimers nevertheless proclaim "Hell yes" to all kinds of ways to spend the 3%'s money, pledging to pay for it ("heh, heh, Sergei will do it").

Now, the hole's opened, the state's called on the citizens to fulfill the pledge. The nickel-and-dimers take one look at the hole and yell "Hell no". All seventeen of them (the rest have just clamped their hands over their eyes).

The worst part of all this, for me, was reading comments in the press from citizens who, repeatedly, said "Vote? Again? What do you think this is, a democracy? I don't even have a clue what I'm supposed to be voting for! Damn you, just fix it and leave me alone!"

There are plenty of Adolphs in this world who would be happy to do just that.

Well, California ia always first in the nation at trying new things. I wonder how long it will take the rest of us to follow this particular lead?

DIRECT DEMOCRACY n. An affirmative answer to the childhood query: viansimIf your friend jumped off a cliff, would you?

Argh! I HATE blogger. It just stuck my verifier in the middle of my post. WHY?! Because it hates me!

The voting dummy is superior to the unregistered dumb ass.

Quilly, have you tried talking nicely to blogger? It senses that YOU hate IT, so it responds like a child. But you are a teacher. A leader. You have to talk softly to blogger. I'm sure you'll work out your issues.

Doug's Dad says: The really sad part is that Doug had a week to write the poem, since the outcome was clear.

Direct democracy is our problem but TLP nails everyone's problem

it is better to have access to referendum than not (which is the constructive case in pennsyltucky).

blue... lots of that feeling in pennsyltucky lately.

So I should be glad I live in Maryland?

It wouldn't be so bad if California wasn't where the term DUH and Dude came from. At least I think it came from there - OC would probably know.

TLP -- in future I will talk softly and carry a BIG stick -- and maybe apply a little "direct democracy" on Blogger.

"I'll duh to that. But I thought you liked California."

"That was yesterday, dude. Yesterday's gone, along with the dude ranches. And California."

"Cutbacks, dude. It's Calithreenia now. Just hope that it's not slashed to Calitwonia any time soon."

"Yeah, well, you wouldn't want to be going to any of those dude ranch convention thingys either. Been goin' on for 150 years, and it ain't no better now than when it started. Bunch of suits from Baltimore pretending they're surfers, and not a one of 'em knows a longboard from a boardroom. Booooring!"

TLP, representative democracy is the same out here. Whether in the legislature or the ballot box, spend more and pay less is always the result.

Amoeba, this is truly maddening, but one of the maddening things is the statistics. I would be leery of the numbers you read, although 60% from 3% doesn't sound comparatively progressive either.

Quilly, we always elect the cliff.

True, Icy, better but not as wise.

Pops, that was funny but not fair. I had no idea until Tuesday night that I'd wake up in Lone Pine on Wednesday. Bon voyage, papa.

You're right, Sauerkraut. At least it ought to make us humble. They are idiots, but clearly so are we.