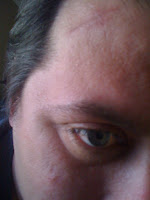 2009 Update: An organ ingeniously, though mindlessly, devised by nature to absorb the force of impact against the cranium from, for example, walls, trees or incited violence. Nature's styrofoam peanut.
Without a soft, spongy, compressible brain to fill the interior, injuries such as the one depicted (right) would pose a much greater threat to the integrity of the skull.
Happy birthday, to my brother, Andy. (Be assured, today's word selection is purely coincidental)
Happy birthday, also, to Nessa.
Posted by Doug at 4:47 AM