The forty-third story, In which a preacher tends the Ninevah of the Northwest 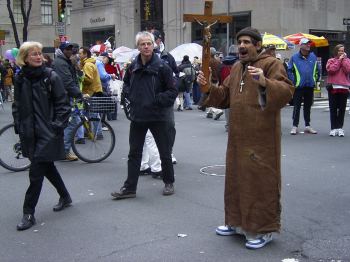 Come listen to a preacher. 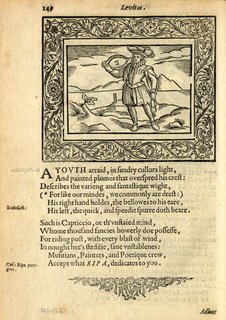 This week in The Prattler, Doug Discusses Darfur. Solutions to follow in a future column.
Posted by Doug at 2:42 AM

I had to check the date three times.

Ariel, you were right the first time

nice tunic you have on there, dog

Nice tunic, yes. But lose the shoes. Blue sneaks don't make it with that outfit.

at least he's not losing his religion, TLP

Yes, yes, TLP, but did Doug manage to tell the tale in 55 words?

Now raise your bitch pops all - cheers to the sassy mama, LOGO!

(btw, Doug, your verifier is not being nice to me - I'm on my third try to post this comment!)

gyegdfnj - gee ya'd think I got good at dealing with frustration living in NJ!

Isn't that Eminem the rapper looking at Logo?

Dogs got religion Karma? I thought they were smarter than that.

You guys, always spreading the good word. Sometimes a little thick. But I got boots.

i think that's Eminem's dad. and that lady who's walking away looks like ... hang on, that's a man

TLP, but Sar has heels

Karma, heels are good. Heels are sexy, but boots are good for walkin'...through bullshit.
Not that there's ever, ever, any BS here.

I will be your preacher teacher
Anything you have in mind

I enjoyed Logo's story even though I don't know Logo very well. nice parables, Logo, keep up the good work! :-)

Karma, one can be right only at the right time. :-P

Yo Doug, funny that you should mention Seattle and "the software is winning the war" in the same blog. You sure that Logo's preacher message isn't "Repent! Microsoft is coming to an end!!"

And given the duration of the Seattle Rain Festival (was once proclaimed on T-shirts to be "September to May", now I see it's been extended to "January 1 to December 31"), I pity poor Logo on that motorbike.

I feel the need to mention(because it reminded me of this song, one of my favorites):
"I need some distraction .Oh beautiful release memories seek from my veins and may be empty oh weightless and maybe I will find some peace tonight in the arms of the angel fly away from here from this star cold hotel room and the endlessness that you feel you are pulled from the racket of your silent reverie your in the arms of the angel may you find some comfort here" - In the Arms of the Angel, Sara McLauglin

Sar said...
This comment has been removed by a blog administrator.
12:42 PM

Sorry, for a second I thought it was Tuesday. ;)

LOL, Sar! Wait, you mean it ain't Tuesday? Hoo boy. I'm either way behind or a bit ahead...Probably ahead.

A head!: that reminds me of a good story 'bout a guy named John. Seems this guy went around tryin' to drown folks in Jesus name, like that.. I forget it all, but a swimming pool was involved I think. Anyhoo, his head ended up on a servin' platter, or maybe an LP.

Is there a lesson or somethin' in that, ya think?

All y'all, Ariel is referring to the fact that the story went up late. Just so you know.

Karma, then meet Logo. Her link, just because I am how I am, is listed as "Ariella." I guess I should fix that sometime.

TLP, the saleslady said they brought out my eyes.

Nope, Karma, still here and the object of many a joke. Amen.

No, Sar, but check the parables. Cheers, though. Definitely.

Of course it is, Lammy. But I should probably say that the picture is of a different street preacher.

TLP, you must have if you're here everyday.

Karma, I hear that a lot.

TLP, it's good that you wear them just in case.

Thanks, Kyahgirl, I'm looking forward to that too. She's usually here by now.

Ariel, that lyric sounds familiar but the closest I can get is "You might be a preacher, teacher putting on a show" from Bob Dylan's "Gotta Serve Somebody."-

Aral, notch that for a future BASIP.

O Ceallaigh, this was a rise of the machines kind of morning.

his too young to be mine, though. :-) very good song, you'll find it everywhere online. sexy as hell.

At one point there is a "woooo"!

Great singing Ariel! And I admit to loving George Michael! Some things from the 80s just gotta stick!

Great story for Logo though I have yet to really meet her! It is VERY late here so off I go to snooze!

Ariel, I couldn't agree more! Father Figure broke when I was a teen, and I remember thinking the lyrics "if you are the desert, I'll be the sea, if you ever hunger, hunger for me" were prolific and sexy. Hey, I was a teen - in the '80s no less! But I still think it's sexy.

Oh yay! I just noticed there's a Prattler update. Not that I was going through Saturday Cynical Political withdrawl or anything. *twitch twitch*

krpmhmx - Karma is at her best in the evening.

Ariel, I have to agree with Kyahgirl. He ain't my daddy.

Sar, she may be out spreading the good news.

but wasn't it really the newspaper carrier who was speading "the words"...?

Lovely tale, Doug. I personally think the sneakers make the outfit. They are sublime.

Hm...looks like that incantation worked for I have returned. Mwah-ha-ha-ha-ha-ha. Plastering my trollop avatar all over the place.

YAY!
I got a story!!
Sorry to be so long, if I had realized I was expected I would have skipped the little league game, or the errand running, or the trip to see mom, or dinner with my sister's family, or something.

Ariel~ Thanks, I am glad you liked my parables via Doug, obscurity is my gift, which he captured well.

Karma~ I knew what that meant, and you sort of kinda know me, from here. Can mean logic too. My name, logophile, refers to my affection for using words, though claims no special expertise in them.

Lucy~ I googled, and it seems there should be an (e) all of the above

Sar~ It was more than 55, but I think we can agree to communicate the nuances of this story, he really needed more than that.
Bitch pops all around!
On the house, Doug?

Kyahgirl~ better late than not at all, right? Good stuff, that Doug!

O Cealleigh~ Yes, the weather is dreadful, simply awful, frightful, EVERYONE should stay away, really, it rains ALL the time, it is horrible, you'd all hate it here.

Doug~ Thanks for clarifying that pic is not actually me, I did recently get a haircut but it looks better than THAT I hope. Skynet making moves on ya, hon?

MizB~ Nice to meet you, I am truly a miracle, I somehow manage to be out spreading the word and still spent too much time on line.

Sar~ I thought it was sexy too, I was so sad to learn George batted for the other team, all my fantasies... alas, alack.
And I am right the hell here!
mwah! Sorry to keep you waiting.

Still life~ You mean people still buy newspapers? I thought all the best of the good news was online, at The Onion.

Oh! After all that chattiness I nearly forgot, I love the definition for the day. I have a new term for going riding.
"I think I shall now engage in a bit of reverie."

Still Life, the Seattle papers still use words? I bet they got them cheap.

Thanks, Jenna, plaster away.

Happy Sunday morning. I see you've written another wonderful story:) I adore the definition, too.
And personally, I think the white sneakers make the preacher less intimidating.

Actonbell, I was actually noticing the blue on the sneakers. But I really think that the preacher needs red Prada. The Pope wears red Prada loafers. You CANNOT go wrong with Prada.

Doug, first you come over to Pezland and ask where the music is.... I put it up moments later and you never came back! Hmpf!

That was a wodnerful story. Made me think a little of Moondog.

I mean wonderful! (But it was wodnerful, too)

"She never let them buy her drinks." I like that about Logo. And the Seattle part. xoxo

Happy Day, Actonbell. Humility starts at the feet, I guess.

TLP, did I ever tell you about the witch I met who sold fake Prada handbags?

Aral, I honestly made a comment yesterday but yes, I checked and it's gone so maybe I didn't notice verifier difficulties.

Moondg from Gidget, Indie? Wodner is our constant challenge.

Hey Dpug, you may not have heard of Moondog, as he called himself. I only found out about him recently, and his music:

The Wikipedia entry is not very detailed, but the biography at the official Website is better:
http://www.moondogscorner.de

That's a very interesting biography and he fits with your John Cage interest, doesn't he? "Bach was doing minimal in his fugues. So what´s new?" Is a great line.

Enjoyed the story... sorry I missed out on it this weekend.
The upper pic is funny, and I've seen similar scenes in San Fran.

What? Bach's fugues are NOT minimalist.

Anyway, Logo is one of the only preachers I can listen to without squirming, Unitarians included.

Sure, Jamie Dawn, but in San Francisco the guy in the tunic is the preachee.

Weirsdo, what would I know, but it's not like he was being Baroque.