Truth in The Vineyard

Episode 9 of The Meditations of Diogenes The Cynic. Thanks to this week's reader. 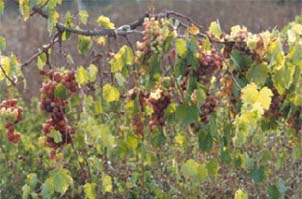 To hear the story, come to the vineyard.


This week, in The Prattler, "The Defense of Unmarriage Act." 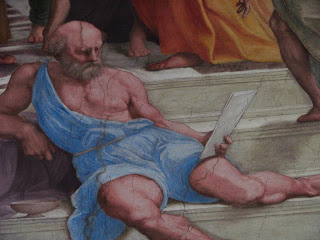 To read the story, look over Diogenes' shoulder.
Posted by Doug at 4:24 AM

Look at me - first!!! Okay, it's a little unfair because I only had time for a cursory listen. I will be back to listen in detail and comment later.

i'll second G's guess, even as i'm second to leave a comment.

whoever it is, GRAND JOB reading another GRAND edition of this tale.

that said, the only reason i'm not certain is because this reader sounds more like a YoungBuck than an "OldMule".

Not only young buck, but a southern boy to boot.

I confess I haven't a clue who this week's reader is, but I enjoyed the story ("truth in the barn/clean stables" - HA!) and the telling of it. In fact, our reader has a dialect that sounds familiar if not from the individual then from my fellow Virginians. It's not a stretch to imagine us all rocking in the chairs on my southern porch listening to this week's reader tell us tales. More lemonade anyone?

The only Yeoman/men I have ever seen, was wearing red and gold and guarding a tower and some ravens.

Smooooth and southern.
I don't know who read it, but it was like butter.

I'm not even a partaker of alcoholic beverages, but I've suddenly got a hankering for some wine.

the only other southern boy i can think of, is our Sweet Baboo (Jake). but he's been MIBA (missing in bloggy action) for quite a little while, so i'm guessing it ain't him.(or is it?)

The story is progressing nicely I see/hear.

I have no idea who read it. So, I'll guess that
O Ceallaigh was tryin' to fool us, what with the southern accent and all. Ya know, the way Minka did with the English accent? Did OC do one already? If so, I missed it, and I don't think I've missed any.

This story is building up! Loving it and loving this reading of it, particularly the word, "unsupahvaised". Really very nice, quite a melodious voice.

Anybody coming forth? Still guessing OleMule or OldMule or the over the hill who is really young mule?

I was thinking Brian for the same reason that Action gave. And the accent -- matches a friend of mine who grew up in Florida.

G, interesting guess. You might remember Old Mule once did a recording for Doug Drones On.

Thanks, Puppy. The talent keeps coming, doesn't it?

Terry, I suspect you may be right. Kind of a piedmont sound, isn't it?

Sure, Sar. Not too tart, not too sweet.

Mo'a was that at Terry's house?

You have a nice weekend, Jamie Dawn. Enjoy the buttah.

Me too, Actonbell. And that was a Karma-quality verifier, young lady.

Puppybrose, I thought Jake was from Colorado for some reason.

TLP, O Ceallaigh is just cad enough to try, isn't he? And given your roots, you'd sure know a fake southern accent from a real one, wouldn't you?

G, I agree it was a very rich reading.

Interesting, Quill, and you may be right but I thought Brian was from Connecticut before moving South as an adult.

And you know, Quill, you're more sanctimonious as a Wordpress user than you are as a Methodist. That's a real accomplishment of sorts.

i thought YoungJake was from No'th Carolinah, but did his super-secret-if-he-told-us-what-he-does-he'd-have-to-kill-us training in Colorado. but i could be wrong (been known to happen).

Great reader.
Grand story.
Now I'll close myself in the closet and think about it.

Wow, OC, that was the most impressive written drawl I think I've ever read. At least lately. :)

nywlu: New York Will Love You (or is it loathe you? hmmmm)

the south is a good place to be.

wow. is that guy taken?

Great reading! I'll go with Brian too as my guess. Nicely done.

Puppybrose, you may be right. Probably are. Jake?

Good grief, Amoeba. If that's you, you fake it better spoken than you do in print.

Icy, tell the truth. You have a bone in there, don't you?

Sar, I knew you were fancy.

Jodes, it is, except maybe in the summer.

Ariel, it's the Hungarian accent, isn't it?

it's Jake. it is Jake, right? RIGHT?? (with his training, it's no surprise he's been able to hang on to his "secret" longer than the rest of us were...) come on, clever Commando-boy, swing on down from that tree you've been hiding in and take a richly deserved bow!

I couldn't comment before. I was busy lazing in my rocking chair on the front porch.

Y'all really know how to make a mule kick in his stall.

i knew i should have held firm with G's first guess (oh yeah, and mine, too...)

and of course it's you, Old(but-not-really)Mule... i'm guessing it was during the process of sending/recieving this fine reading that the plan for the Chicago meet 'n greet was hatched, right? (i am so glad the mule is out of the barn... now i can get on with my weekend, or what's left of it!)

He sounds great! I'd like to get to know that guy!

wow...that is some voice and some great stiry telling.

An honest man with dice, ey
?! And a philosopher should plan ahead for darkness, he´s never gonna see the light is he?!

AS to the voice, I wouldn´t have known.

I was quite impressed you keep me on my toes as always.

Sadly I killed my sound on both computers while installing skype and have yet to repair either so I can not judge the voice.

Don't know who it is but it sure is a yummy nummy accent! Y'all can drawl my way any time. aaaaany time.

Neva, don't you have until Friday to enjoy your weekend?

Lammy, it's a scurrilous stereotype that southerners are interested in sheep. Your chances are no better than 50/50. Try a midwesterner.

Thanks, Minka. That was a strong reading, wasn't it?

You're missing out, Alice but thanks. I hope you get the sound back soon.

Thank you, Ms. Howard. Mule, she means it.

seriously, even I'M waiting around (so you just know it's late)

Hey. Cut the Dawg some slack. You'd think we were paying him or something. Maybe Blogger's done a number on him. Or SoCal traffic has ... It would be a tragedy of atmospheric proportions if our early-onset curmudgeon had a fundamental disagreement with a smogberry tree alongside an LA freeway.

Well, I'm callin' in the Sheriff. We could all meet in Chicago and be a posse and search for the dawg.

If we don't find him in Chicago at the end of a week, we can fly to Paris. I just bet that's where he is. We'll give that a week or so. We can take a vote there on where to look next. I'm nominating Greece.

Late, adj. Dead, as in the late Mr. Pascover.

Or the late fee charged for worrying blog readers.

late, just inappropriate in the male character... however fashionable in a lady.

*gets out a little booklet about First Aid and studies anxiously*

TLP, I´ll join you in Paris and I´ll second you onteh Greece vote. If not there well Timbuktu is an option too!

Gosh, Neva. I hope the dogs were fed and your teeth brushed. I'll feel terrible otherwise.

Thanks, Amoeba. It was a chrono-synclastic infundibulum I hit, actually.

Quilly, you actually got a comment from me this morning, now that I think about it. Of course, it was about the dead so I understand your concern.

Mireille, I'm not quite dead yet.

Minka, I actually would like to see Timbuktu. Maybe I'll help you look.