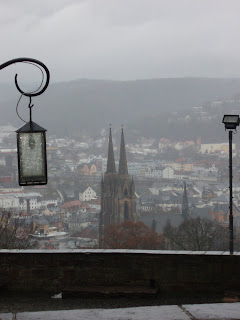 Teil Zwei
Elizabeth's Church and Marburg are to the right. Click on the photo to hear the story. 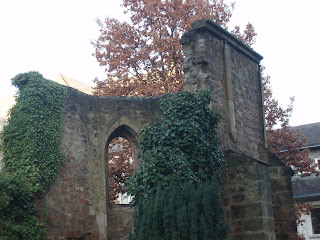 To the left, the remaining wall of St. Elizabeth of Hungary's hospital.  Click on the photo to read the story.
Posted by Doug at 4:50 AM

It is a subtle distortion of one's view of reality to be raised by a different species, especially living with humans. --Icy

That Gretchen. Give her a drink and she'll take the farm.

Nice, I love Gretchen already. Junglebook goes sausage hunting, kinda thing.
Although what did you mean when you said "Sproch!"???
also...that was a very weak knock, man!

I am a bit shocked that a "man of God" would see fit to leave a baby suckling with pigs: don't get me wrong...I happen to really love pigs ever since reading Charlotte's Web. I never did understand why my dad would not let me raise a pig for my 4-H project, but hey, have you ever smelled a real sow's pen?
.
Very nice shot of the Hospital.

I wouldn't sell MY brother for a penny. A nice shiny quarter maybe, but definitely not a penny.

I'm already really into this new series.
Well done, Doug.
Europe was a good influence on your creativity.

Good Morning!!! So the nuns had no ovaries, one would think that with all that 'faith',,this would have been the perfect opportunity to fulfill one of the many vows of their 'faith'... easier to pick and choose, is my experience... Sprouch, must mean; Heat-Need Heat Now! Must say, it is a testament to the homo breed of mammals,of its' ability to deal with adversity,at a young age,an old boar can be quite trying....yet she,Gretchen,has persevered...must be in her twenties by now..........As i was saying,good morning--Thank You for the delightful read.....Peace :-)

Que sera, sera. If the old nuns knew nothing of Gretchen's birth mother, how do they know they aren't repeating the cycle? Hmmm?

if you wanna clean a girl up and figth genetics leave her with pigs to...drown out the ape?

Icy, I bet Bootsy can tell you all about it.

Actonbell, a fetchin' Gretchen? How didn't I think of that?

Minka, I should have knocked louder. Someone might have let me in.

Terry, if you had to choose between being raised by a pig and a priest?

Thanks, JD. Now I just have to write some in Santa Clarita.

Why, good morning, Bear. Yeah, I have her at 20 as the story starts.

Quilly, that's an excellent question. It should have been asked in German.

"They will go through a body that weighs 200 pounds in about eight minutes. That means that a single pig can consume two pounds of uncooked flesh every minute. Hence the expression, "as greedy as a pig"."

Memorable quote from the movie "Snatch". :)

That would be a memorable quote to me too if I had seen that movie.