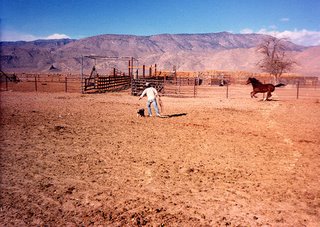 To hear the story, say howdy to Doug 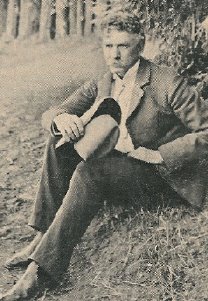 HEADLINE: IDENTITY CRISIS DEEPENS
Santa Clarita, California April 1, 2006
A lonely blogger in this dusty desert hamlet of 150,000 souls added a weekly column to Prattle, to be written on contemporary issues in an imitation of Ambrose Bierce's sinister style. Doug Pascover has spent the last of the best years of his life imitating Bierce's lexicography but reports feelings of guilt and inadequacy after reading on the website of The Ambrose Bierce Appreciation Society that he had revived Bierce's column, Prattle, when he knew he had only plagiarized the title. The introductory column can be found on Prattle on the page listed as "The Prattler." Future columns are intended to appear on Saturday, the day The Wasp, the weekly for which Bierce's column appeared in the 1880s and 90s was published. Mr. Pascover's dogs, Willie and Walela ask that you pray for his self-recollection.
Posted by Doug at 4:56 AM

You used a very bad word in your story!

You stinker! Bierce must be doing the happy dance in his grave being associated with the Pez and the continuing inspiration of a sly curmudgeon dog! What's next, Doug, are we going to learn that you're actually Detective Poirot?

Btw, please tell me is your Prattle announcement isn't an April Fool's prank also! That would be a very cool weekly read.

Sar, to err is human, to stink divinish. No, the Prattle announcement is real. I've been thinking about doing it since I read on the website of The Ambrose Bierce Appreciation Society that I had revived Prattle and I knew I hadn't. The Bierce story week seemed like a good roll-out day. But don't take my word for it. Choose a pill and click the link.

Great story you told us. But why does it have to be April first? ;-(

Lordy, that was beautiful Doug. You have a really wonderful voice.

Doug - I did follow the Prattle link and it's fantastic! I do hope you stick with it as a weekly gig. Doug writing snarky political prose. Who'd of thunk it!

You had me goin' there. Great story!

I'll have to check the Prattle link now...

Indie, thanks. Because March 31 is dad and gone?

Aw, thanks, Mutha. I'm glad you enjoyed it.

Aral, if I can fool you on April 1, the world recedes at my feet. Let me know what you think of Prattler. I should have said you have to navigate there from the homepage "Prattle"

Douglas, you are a dog

Douglas, I like that I think I'll use it from now on.

That really wasn't fair because I haven't been awake that long.

April Fools - I don't think anyone here as I'm sure you wouldn't put up with it.

Douglas? Why has that never occured to me before. Mind you Dad Pascover might play jokes on April Fool´s day as well. Apple doesn´t fall far from its tree, people say. mind you people´d say anything!

So, lilacs are delicate flowers?

Geeze, Doug. I was certain after hearing the first few sentences about you and Tim in the cabin together, Broke Back Mountain was going to be the next allusion...and the double skinning, cute. By the way, was that Vegas next to you in the picture? If so, Awww and sniff! If not, oh well.

Nice going on the Prattler. That's my son!

I love the story. lilac fits well with headstrong cowboys it's being a headstrong plant herself. did Senor Rabbit Rabbit still go shooting at the time?

The Prattle column is going to be fun.

mama, you took the words right outa my mouth. i was serously wondering why Douglas was so gay ...er.. i mean happy - trying to make a fool of everyone.

do you mind if i whip him?

Cowboys are always getting into trouble.

I hope this will not further complicate your identity crisis/Bierce complex, but if you answered the questions honestly,
YOU ARE PANSI! Wherever you are, you are the center of attention, which is natural, because you are a SUPERSTAR! Quickly attached and intensely loving, you can also be fiercely jealous, and of course you ALWAYS demand slavish devotion from your fans. Although you move in the sophisticated world of successful celebrity, you remain a child at heart with an imagination bordering on the psychotic and no self-control.

Rabbit, rabbit!
Lucky April to you!

That old vet should be put to sleep for shooting Ambrose.

April Fool: No such thing. One is either a year-round fool or not a fool at all.
That definition doesn't really make sense, but I'm an April Fool, so it doesn't have to.

Yet again, I am DISTRAUGHT!

Douglas, you're good at fooling people.

You do it every day.

Well, Pops, I was raised with fleas. Good morning, though.

Auch du, mädchen! He wasn't lying. My birth certificate says Douglas. Of course, it has the wrong middle name, so I don't put much stock in it.

Haha, Mama! I may have to reconsider where I got the sarcasm from.

Thanks, Ariel. I hope so.

Karma, gay baiting and threatening me? Auspicious and well-earned.

Rabbit, Rabbit, Cowgirl! Wonder why that is.

Weirsdo, probably because I was sitting in front of my "What Would Pansi Do?" sampler when I took the quiz.

Rabbit, Rabbit to you, Jamie Dawn. I think Bierce was making the same point. I'm a 13-month-a-year fool, myself.

Anonymous, all God's chillin' have gifts.

if you fool people every day, Doug, you have to tell the truth on Fools' Day when everybody expects to be fooled, that way you'll fool us all.

can you tell me which Beatles song I am thinking of?

Rabbit rabbit! I have to admit that I was completely taken in all the way to the mention of rabbit. Oh, my, what a fool am I!

Off to check out Prattle.

wthverk: What the heck, verifier is back.

Day after day, alone on the BLOG,
The man with the foolish grin is keeping perfectly still.
But nobody wants to know him,
They can see that he's just a fool.
And he never gives an answer .....

Well on his way, his head in a cloud,
The man of a thousand WORDS, talking perfectly loud.
But nobody ever hears him,
Or the sound he appears to make.
And he never seems to notice .....

And nobody seems to like him,
They can tell what he wants to do.
AND HE NEVER SHOWS HIS FEELINGS,

Great story, Doug. You should write a book, you know! You have a wonderful talent.

April's fool: When someone tells you life will certainly get better, evil guys go to hell and that you'll someday be happy.

Ariel, how do you know that wasn't the truth.

Anonymous, I bet you're right. We'll ask Ariel when it's dawn in Hungary.

Thanks, Marwa. Publish yours and I'll think about it. And ask me tomorrow what I think of your future.

i love 'Fool on the Hill', anonymous. but Ariel could be thinking of 'Nowhere Man' when she's here

no, it was Sexy Sadie that started singing in my head, sexy sadie what have you done, you made a fool of everyOOOOOOne, you made a fool of everyoooooone, sexy sadie, oh-oh, what have you done... please, Doug, don't take me wrong, without any hidden thoughts it just started singing in my head. you know, songs do that. although now that the word verification misery is back, I am starting to think there's truth in some phrases of that song... :-P

A very clever story! When is your book being published?

Karma, a good guess from the land of funny alphabets.

Ariel, a good song. I heard on the radio that was originally Sexy Swami, written about Maharishi Mashesh Yogi. No fear of things being taken wrong. Jesters have thick skin. By the way, I was getting tons of spam comments on week- and month-old posts. Those sons of macaws are crafty.

Thanks Dddragon, of what book do you speak? The one you're illustrating?

I never got the impression you suffered fools glady Doug. I do think that you suffer greatly due to fools and that is a totally .different thing.

Love it, love it.
Good yarn.
If you don't fish, you definitely should.

Yes, Doug, you are very talented, and I appreciate, I think, my new knowledge about you and Ambrose--would love more stories; am joining the Doug should write a book fan club because you are totally impressive

This was a long way around asking the idiotic question of the day; are we supposed to deblogroll Doug drones on for Prattle, keep both or what?

Us charter members of the Doug Pascover fan club, and the Dawg should write a book club need to know these things.

You aren't a fool, on a hill, on a blog, on top of Old Smokey, nowhere.

Anonymous can't be talkin' 'bout YOU.

Truth is, Alice, I barely suffer at all. It's kind of embarrassing.

Logo, I haven't fished in years, but you wouldn't believe the big daddy I nearly caught just yesterday.

Thanks, Pia. No book forthcoming, but I sure am blogging a bunch. The linking is obviously up to you. I'll keep up Doug Drones On, if only because I like having other people post stories on it, and it only costs a few clicks a week to maintain. The only content on Prattle that won't be here is the weekly column.

TLP, I much appreciate your saying that. You're a good blogmama. I suspect Anonymous knows me in a way that entitles her to think and speak poorly of me if she finds it useful.

Maybe anonymous is a man, or maybe it's me Alice, aka Cooper, aka, kristin. Or, maybe it's my perfect butt talking.

We believe Doug is the reincarnation of Bierce's spirit.

OK, anonymous, but not Alice.