Story #48, In which justice is served. 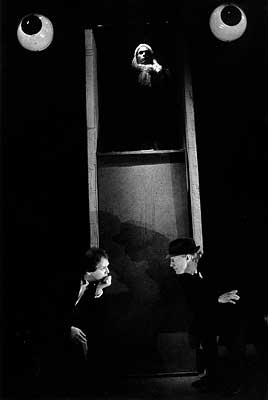 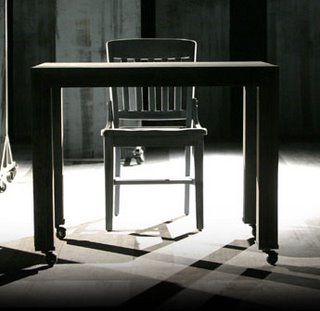 Today in The Prattler, Needless Things
Posted by Doug at 3:52 AM

Areil: a lady who I always visualise dressed in red, wearing a cocky hat and a half-smile

Fabulous job of both writing and narrating. Sounding like a professional. Nice tribute to Ariel.

You go SIS! And yay for Ariel!

I enjoyed Ariel's deviant and funny "transcripts". Though, now I'm going to wonder what Ariel's really thinking behind her comments. Hmmm...

Have a great weekend everyone!

Cool stuff as usual Doug. Hooah, Ariel! Must depart now, the plane for California awaits. In the glorious Sar tradition of shamelessness, may I point out that the Sunday Diabolical Lexicographer is up a day early (see "California", above); have a look.

You captured Ariel, the nefarious court reporter, perfectly. I knew it, I just knew it!

oh, and the voices are great, I read it first then listened. changed the whole story.
good job Doug!

as a stand alone tale, this is fabulous! yet, i, for one, seek the "deeper" implication... and harken back to a bit of dialogue we had yesterday. for surely, on a larger scale, this speaks volumes about the way this country has been run, at least, in the past few years....

that said, it is saturday... and, with the wonderful ariel as your muse, you were, in fact, simply aiming for some edgy ironic humor, right? : D

either way... i am forever indebted to Sar for encouraging me to speak up--for, as i've said before, an accomplished wordsmith, such as yourself, deserves all the praise this puppy can heap!

by the way... i love listening to your fine, textured delivery... i must say, it adds a great deal to an already excellent bit of writing (you should be doing these for NPR... ever thought of that?)

Karma, I'd bet on the half-smile.

Sar, I'm sure she only tells the truth. Happy weekend to you.

Thanks, TLP. Droll is kind of our specialty.

O Ceallaigh, Shame is not our specialty. I'll have a look. Safe travels.

Thanks, Kyahgirl. God loves the commenter who does not post.

Thanks, Puppytoes. I already donate to and volunteer for NPR. How much blood can they take from a man? It is interesting to me how a satire of socialism can feel so much like a parody of so-called-conservatism. These are interesting times.

interesting times, indeed... actually, an episode of Twilight Zone with Fritz Weaver and Burgess Meredith popped into my head as i first read the story. Rod Serling often created the same kind of satiric/parodic parallels...and it was always brilliant! (as are you)

and, why am i not surprised to know you donate and/or volunteer for NPR? still... these stories are so damn good... it's a shame more folks don't get to read/hear them! (or will you be/are you published? in which case i'll shut up. for it's always good to be compensated for your efforts, and i highly approve of the practice!)

wow, Doug, I had no idea Kafka could be parodized, and here, that's what you're just doing. good job. and I don't think you know in how many ways your story touches me, Kafka being only one of those... thank you.

England/ Paraguay 1:0!
Why? What were we talking about?

Oh my God!
That was ingenious!
I think Franz owns some of the credit, but WOW!

you keep on amazing me.

Ariel could make a "prozess" of quite a few, I bet!

finally I could listen to it. great! your judge reminds of the Worm Of Honour from the movie "Wall". I like the pictures too.

ooooooooooooooooooooo
good one!!
Ariel, in a sleek grey dress (grey is the new black), right?
With stilettos or sensible heels?
I ask, as I sit here in jeans and a fleece hoodie.
:p
Great story, Doug, another work of genius.

Perfect! Ariel with just the right touch of Kafka! You are BRILLIANT, she said non-retalitorially, winking winsomely. ♥ xoxo

my darling Ariel, when i'm not power dressing, i do the same ... wear my jeans till they can stand by themselves ;))

I know you all were just dying to know :)

Argentina is playing in a while and I´ll be sure to let you guys know when the USA kicks off!

Ariel is intelligent and witty. Your story captures both.

Activist judges... don't EVEN get me started!!!

thank you for the kind words, guys! I'm so proud to to be in such a great story!

puppytoes, when I talk to American friends of mine, sometimes the things they tell about reminds me of our times of socialism! yeah, strange.

I love the pictures Doug! Beautiful!

The story... right on! It takes amazing skill to catch an elusive chica as is our Ariel!

Minka, thanks for keeping score on the world cup, Kafka and I. And thank you.

Thanks, Alice. The lower photo is from the film version of Kafka's The Trial, and the upper one is from a stage version.

Ariel, it's all in your mind. You're just having feelings of an almost human nature. This will not do.

Thanks, Logo. Ariel can pick out her dress.

Mireille, that wink isn't fooling anyone.

Hahaha, Mistress Anna. You have to be at least one of those three to write policy in the first place. I'm the latter two. Entirely rational, though.

Karma, I bet that saves money on skate boards.

Thanks, Minka. Please see that we stay informed.

Jamie Dawn, I think I kind of did on the page. Yes, Ariel's a clever one.

It is tough keeping up with this, but somebody´s gotta do it :)

Oooh me likey the story. Very clever. I much prefered Ariel's transcript to what they were discussin. Much more entertaining...and probably closer to the truth.

Ivory Coast that is. the guys in oddly wet orange shirts. they were soaking wet after the first 15 minutes, I was wondering what kind of coke they were on...

ariel, yeah what were those shirts all about? And I knew it was the Ivory Coast, I was trying to be funny...didn´t work though :)

Minka, your heroism is appreciated. Mali?

Thanks, Jenna. Glad you likey.

Ariel, this is starting to sound like a modelling contest.

Minka, I though it was funny. It's also interesting that both African countries are tiny and next to each other. I guess in Colonial times they would have called that area The Goal Coast. (Let's see if that's funny)

Oh great story Doug! And Ariel I love the photos I saw on your site...beuatiful!

awww, sorry, Monika, in English I'm even more dumb than in Hungarian. :-/ the wet shirts, I was just wondering 'cause the players are not normally soaking wet after the first 15 minutes. thought their doctor had changed the pills or something...

vhwhlyn: with whoever you want, Kaitlyn.

WONDERFUL!!! One of the best yet...hands down. Hooray for Ariel!

Excuuusee me, NPR! Uhmmmm HELLOOO
Can you please let us know in advance of your next segment?

WoW, this was a great week for definitions.

Thanks, Squaregirl. Her photography is very impressive isn't it? Did you page back and look at the cemetary photos?

Ariel, the was Karma-quality verifying. Ha!

Minka, she has photos up here.

Thanks, Still Life. How's the book coming along?