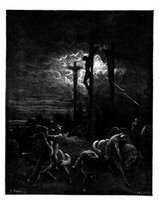 CROSS, n. An ancient religious symbol erroneously supposed to owe its significance to the most solemn event in the history of Christianity, but really antedating it by thousands of years. By many it has been believed to be identical with the crux ansata of the ancient phallic worship, but it has been traced even beyond all that we know of that, to the rites of primitive peoples. We have to-day the White Cross as a symbol of chastity, and the Red Cross as a badge of benevolent neutrality in war. Having in mind the former, the reverend Father Gassalasca Jape smites the lyre to the effect following:

"Be good, be good!" the sisterhood
Cry out in holy chorus,
And, to dissuade from sin, parade
Their various charms before us.

But why, O why, has ne'er an eye
Seen her of winsome manner
And youthful grace and pretty face
Flaunting the White Cross banner?

Now where's the need of speech and screed
To better our behaving?
A simpler plan for saving man
(But, first, is he worth saving?)

Is, dears, when he declines to flee
From bad thoughts that beset him,
Ignores the Law as 't were a straw,
And wants to sin — don't let him.

2006 Update: An artifact of faith when worn on the back.

A good Good Friday to my Christian friends, a happy Pesach to the Jews, a strong cup of coffee to the Pagans, apostates and Unitarians and to the Muslims, TGIF?
Posted by Doug at 4:06 AM

The Cross I bear is to attempt to be the first one on Doug's blog.

how would Christianity look today if they'd have known electric chair at the time?

some hot cross buns along with my mocha please

CROSS, n. To Christians, the crux of the matter. The enduring sign of what happens when two Entities are at cross purposes. A symbol thought to represent the Good, when it really is an artifact of the Devil.

Anyone care to explain how come Easter, the defining date and celebration of Christianity, is named after a pagan goddess?

Fair Nymphs, and well-drest Youths around her shone,
But ev'ry Eye was fix'd on her alone.
On her white Breast a sparkling CROSS she wore,
Which Jews might kiss, and Infidels adore.
Her lively Looks a sprightly Mind disclose,
Quick as her Eyes, and as unfix'd as those. . . .

Well done, Dddragon. You're first, and commented while I was still formatting. You earned your coffee.

That's funny, Ariel. I suppose we'd pat our butts upon entering church. The pews might have straps too.

Coming right up, Karma. I think we're out of pancakes for a week, though.

Thanks, O Ceallaigh. Only in English is it called that. In other European languages it's usually named after the Hebrew celebration its aligned with.

Nice, Pansi. You sure are well-read.

Cross, adj: to appear unhappy, disgruntled. As in, "That guy sure looked cross right before they nailed his hands."

Cross, noun: A burden to carry, a process to go through. As in, "My student's test scores from standardized testing this week will be my cross."

Cross, verb: what the Pagans were when teh Christian Easter took over Ostara and added a month of fasting, long church sermons...

Cross, noun: a symbol that things could always be worse - you could've been sent to Earth to die for the sins of the people who created American Idol, in a long and arduous public display of humiliation and mutilation... well, like American Idol. 'Cept Jesus would have smiled at Simon's cruelty, being the cool dude he is.

too early...religion...can't function...I'll be back with something smart-alecky and almost guaranteed to cause lightning to strike me when I walk out the door.

Ha, Mutha. Yeah it will happen under certain circumstances. For me it's someone indecisive ahead of me on the freeway.

Welcome, elementaryschoolteacher. I hope you've met Fred (link on right.) They do like to fit you guys with burdens. Watch the core curriculum albatross, too.

Probably should be TAIF, Em. Thanks. Forgive him, Paula, for he knoweth not what he does.

I'll look forward to your return, Masil. When your irises are dilated.

buns are good enough for me right now, dawg. i'll keep my fingers, eyes and legs crossed for a week, though

Cross, n., A sign made with one's fingers, held out in front of one's body in order to ward off vampires and dawgs.

Unless they're handsome of course. In that case you just let'em bite you. (I think maybe if they're not so handsome, you say "bite me," but I've forgotten so much.)

I do so love TLP!
Doug, I hope you are not cross with me about my having brought one of my crosses to bear here to share with you all (the VI).
Cross my heart, I have done my best to improve his typing, spelling, sentence structure and gramamr. Perhaps some day he will be understandable but we'll cross that stream when we come to it.
But whatever you do, don't cross HIM!
(Since he worked so well as a kleptomaniac and whine definition I thought I would finish out the week in a theme)

I'm all crossed out so don't cross me.

Logo has a cross to bear..see what I put up with. It is a good thing the only thing crossed on me is my eyes.

The work I go throuth to please her. Do you have any Idea how difficult it is to type/mispell/mis-quote etc. I have worked many long hours to achieve the perfection that is the idiot you see here before you.

cross -- a genetic mutation normally conceived in a laboratory.

The image of Jesus bearing his cross is the ultimate example of selfless love.
Cross bearing is not an easy thing, but all of us have crosses we must bear. Darn it!

Cross, n. To the Christian world, the focus of all history and time. Because of its singular importance, it is often reproduced on earrings, tattoos, and the album art of heavy metal acts.

Do you have any idea of how many questions two kids can ask on such the interesting subject of 'Good Friday', Easter, Seder, Passover,....and the bunny....?

Oy, I need a coffee.

Very dry, very clever definition, Doug. I have a feeling, though, you mean to say that it's opposite is not true, i.e., wearing a cross on the front is not necessarily an article of faith. (But that can't be said with near as much effect as in your definition.)
Thank you for being less esoteric than usual today. I was pleased to be able to get what the hell you're talking about.

You do that, Karma. There must be something I don't know at your breakfasts with Sar.

I always get the cross, TLP.

Not at all, Logo. We bring them everywhere, don't we?

Jamie Dawn, it was a really funny comment of Ariel's, wasn't it? I think most of us prefer to wear them than bear them.

a4g, ours is a reverent people, my atheist friend.

Kyahgirl, good stuff right? Just tell them about the nails through the hands, the blood on the lintel and the promiscuity of lagomorphs. That ought to settle it.

Semisweet1, nice to hear from you, old friend. And you read that well. I deleted the second sentence "A fashion accessory when worn elsewhere." Happy pesach, amigo. Do you guys do seder?

I wouldn't give you the cross honey. (No, not the finger either.)

I haven't seen anyone talking about the Red Cross today. Talk about a cross to bear. They've been caught red-handed with a few scandals.

But mainly I'm thinking of all we owe to the word CROSS. I mean, like, we need it for all those jokes, ya know?
Like: Why did the dog cross the road? To get to the barking lot.

Well, Big D, my observance of the Seder this year was restricted to watching the latest version of "The Ten Commandments", mostly with the sound off. I remembered my forefathers on the first night of Passover with a #2 from Nathan's (two dogs, small fries and coke.) The excuse I don't even believe is that I was selling bunnies. It's true, but not enough to satisfy "I am who I am."

Uppity talkers say something like, "I'm really cross with you!"

People where I live say, "If you cross onto my property, I'll blow yer head off!"

Kids say, "Cross my heart and hope to die."

General Sherman (my turtle) told me this joke:
"Why did the turtle cross the road?"
"He was stalking the chicken."

-----------
My brother is pianist for a big church down in Southern CA and they usually have their Easter servives outdoors at a big fairgrounds. I hear you are expecting more rain this weekend. He tells me they have a contingency plan.

TLP, that's a day-brightener. The barking lot! Wait'll I tell that one to Willie.

S, shouldn't you be out selling marshmallow bunnies? Hey, when are you going to invent that?

Mutha, from what I remember about Catholic girls...

It was raining turtles and toads a minute ago, Jamie Dawn, but it's supposed to clear up. Is he part of the Hollywood Bowl sunrise service? I'd like to see that once. Happy Easter to you.

Oh, and here's a good one for your turtle: Why did General Sherman cross the state? Are you ever tempted to tell your neighbors your turtle's name is "General Longstreet"

Hi Doug, just came back to see your comment and had to go to google (again!) You are far too intellectual; every time you talk to me I have to go look something up! Anyway, now I know what a lagomorph is :-)

I won't be discussing lagomorphs in the context of Easter at this time. I've just about got them all sorted out for human reproduction. If I try to throw in rabbits and chocolate eggs and jelly beans and such I can just see a big headache coming!!

Wishing you many tons of delicious chocolate this coming weekend :-)

Thanks, Kyahgirl and a great weekend to you. By the way, the culprit behind my even knowing the word Lagomorph is just underneath you today.

Aral, 'Twas on that old cross, where the dearest and best for a world full of sinners was slain.

Om, Actonbell! There is no more appropriate word to go perpendicular on.

cross - Something I' always bearing.

Yeah, I'm still admiring Ariel's comment. But I'm thinkin' that a person being hanged would be okay. You know, a hooded figure with the hands tied behind the back, hanging from a rope---that would be a nice necklace. Oh,oh, oh,...it would be a nice chocolate piece too! Semi-Sweet, are you listening?

Well, it's Saturday where I live.

Cross... emotion arising out of the boy throwing his cereal down whilst being fed, getting soymilk everywhere from the rug to the couch to the mother's pj's...

Cross... he is bearing his in timeout.

When the f*%k will he learn to not cross me? AAargh!

thank you! TLP, you must believe in "simple yet elegant". :-P

I too tried to look up the word "lagomorph" but had to start new looking ups to understand the definition, and then new ones, and finally I lost my way.

thinking about it, TLP, a person hung up would do great lollipops, too. they could come in every colours!